The Lost Diggers of Fromelles

A profile of George Robert Duncan killed at the Battle of Fromelles in 1916. Created by Ayla Riza and Elena Wregg from St Clare's College, Waverley.
Feb 24
0 Comments A song written by Alan Buckley in honour of the brave soldiers that fought at Fromelles in July 1916. Recorded at RPP Bluescope Studios Mornington, video by ...
Nov 21, 2019
3 Comments

Keith Richard Towe is now a member of The Lost Diggers of Fromelles
Oct 4, 2019
Welcome Them!

THE LOST DIGGERS OF FROMELLES RESOURCES

This is where the students of St Mary's Cathedral College meet to explore the lives of those men who have become known as "The Lost Diggers of Fromelles'.

A group of SMCC students visited France in 2017 to spend time exploring the Western Front. Their magnificent History teacher, Steve Garry accompanied by three other teachers led the students on a tour of many of the significant battlefields as well as spending time in Paris. It was a most memorable experience for all. Steve set up a site for the trip.

Channel 7 did a nice story on the group while they were visiting various sites.

One of the highlights for Steve has always been his trip to the museum at Fromelles. This trip was no different. In fact Steve has made another connection through the museum. There is a wonderful site set up called, 'Recovering the Past' by Ian Alderman.

Lambis has been keeping us up to date with all the latest on what has been happening around the identification of soldiers.

Apple have just released a collection of resources to commemorate the centenary of WW1. Click on the image below to go to the resources in the iTunes Store.

With the centenary being celebrated recently a number of stories have appeared across all forms of media. 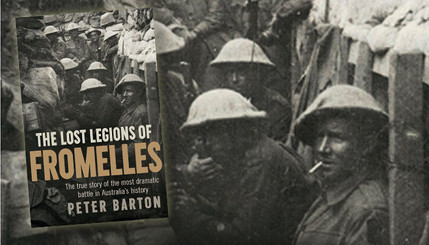 There have been many other sites and resources created since we began the project. Here are a sample:

Friends of the AIF

A small group of students created profiles for the Commemoration Ceremony in France in July. This was a great honour and the video profiles were very well received.

We will be producing more video profiles of the soldiers killed at Fromelles in 1916. Again the Year 10 History classes will undertake this challenge. Our aim is to have created a profile for each of the soldiers as a tribute to their courage and selflessness.

The AIF database is a good place to start looking.

We have been fortunate to be supported by Lambis Englezos throughout the journey. This has meant a great deal to the staff and students involved in the project. Some of what Lambis has done can be seen in this SBS documentary.

The soldiers we created video profiles for previously are obviously not to be done again. They are HERBERT BOLT, HENRY CRESSY, VICTOR SAMPSON, ALLAN BENNETT, COLIN ARNOTT and RAYMOND PFLAUM.

These soldiers were completed by students in 2011. GEORGE PAGAN,

*Recent story about the search for David Irvin (April 2016)

Due to changes to the syllabus no profiles were constructed in 2014.

In 2016 only one profile was considered worthy of inclusion on this site.

In 2018 the students from St Clare's College in Waverley began creating video tributes to the soldiers missing following the Battle of Fromelles. Under the guidance of Lambis these are the videos they created.

JOHN (JACK) P. PHILLIPS *(Anne Stewart who is a member of the Ning is a relative)
ARTHUR DONALD LEIGH,

ALFRED MOMPHLAIT(resources from relatives of Alfred),

FRANCIS JAMES WILLIAMS *(Francis Margaret Gregory is a relative and a member of the Ning),

ALEXANDER THOMAS O'DONNELL (Mr Burden has a contact for Alexander),

FREDERICK GEORGE USHER (Mr Burden has a contact for Frederick),

JAMES PLOZZA (Mr Burden has a contact for James),

MATTHEW HEPPLE *(Jon Andrews is a relative of Matthew and is a member of the Ning),

FREDERICK FLETCHER *(Bill Wright from the Oatley Sub Branch can assist with the profile on Frederick. Mr Burden has his contact details)

We would like to thank Chloe Wootten from the Dept. of Defence, Damian Madden from the Virtual Fromelles Museum and Chris Munro from the Friends of the AIF for all their help in providing resources and links to assist in constructing the stories. A very special thanks to Chris Reason from Channel 7 for the inspiration and setting up of the project through his involvement in reporting on Fromelles and his links with the Dept of Defence.

Thanks also to all the boys for giving up so much of their own time and to Mr Steve Garry our History teacher for all his wisdom and insight into the various battles of WW1. His advice, guidance, enthusiasm and ongoing commitment to the project ensures the program will be ongoing.

Steve and the students involved have been asked to present this project at a number of venues. It is wonderful recognition of their skill, knowledge and commitment to keeping the memory of these men alive.

The following link will take you to images of the ceremony released by the Department of Defence.

There has also been a release of photos through the Commonwelath War Graves Commission.

Born in the NSW town of Canowindra , Albert Williamson was the tenth child of Joseph and Cecilia Williamson. A 22 year-old labourer he was living at Rose Villa with his mother, his father having…Continue

This was a diary entry from Francis Armstrong: A friend of mine, Private A.E Rodda, received a communication from you , asking for particulars of the death of Lieut. B. Mendelsohn of this battalion…Continue

I have just accessed the profile on Allan Bennett via the link on this site. It has an unfortunate omission in that it doesn't mention Allan's other brother who was serving in the AIF. Happens to be…Continue

Here is an article about Allan Bennett from a WA newspaper

Letters from Indigenous soldiers in WW1

Letters from Aboriginal men who served Australia during the First World War are extremely rare.

But as the history of Aboriginal military service during the Great War is given greater attention, their firsthand accounts illustrate better than anything the sacrifice and the emotional cost of war.

The letters and postcards, some held privately, tell a moving, if laconic, story tinged with longing, gallows humour, bravado and sadness.…

Leonard Broadhurst is my Great Uncle, I have his birth certificate and to the best of my and other family members knowledge, he only had 1 christian name, Leonard. Birth Certificate shows only Leonard.   Uncle Len was born 2 Feb 1894.  The 3 brothers, all moved their birth dates by 1 yr so that the youngest (Bert) could enlist and the brothers would not attract undue attention due to age discrepancies.  I am also intrigued as to where the information about injury to the knee was sourced? …

A Memorial Service to honour the supreme sacrifice of Harry Cressy, 54th Battalion, and 23 1st A.I.F. soldiers who are memorialised or should be memorialised at Sandgate Cemetery, will take place on the 19th July 2016.

I am looking for a guest speaker to give a short history of the Battle of Fromelles. Two other guest speakers will talk about Harry's life and service and also read extracts from his diary.

Please email me at garwood@live.com.au if you…

I am wanting to say that I am so pleased to have found this site. The battle of Fromelles was particularly poignant for my family on both sides. We lost two boys, William WASS "54th Battalion" and Richard Yardy "53rd Battalion" during this operation.

From what I understand William Wass was an Englishman, a veteran of both the Boer War and Boxer Rebellion. William was a relative of my Great Grandfather and came to Australia following the Boer War with the…

Welcome to
The Lost Diggers of Fromelles